Brenda and Anderson have been transforming the world of Brazilian Zouk since 2014. They have a style like no other - expressive, intimate and genuine. Their unique way of dancing is based on several physical and philosophic concepts, that creates an opportunity for anybody at any level, to have deep and transformative connection experiences through dance.

It's been 3 years since they were last here, and they've only continued to become more popular over the years. We can't wait to see how their methodology has evolved! During their time here, Brenda and Anderson will be sharing their knowledge with us, across 9 hours of workshops and 3 parties! Workshops will focus on various concepts like grounding, lead and follow, and flow, and will run in 2-hr blocks.

Don't miss out on Anderson and Brenda's workshops! Their philosophy and methodology are very different from what is usually expected with traditional Brazilian Zouk. They will bring your Zouk to a whole new level of enjoyment. Register for your ZoukRush passes today!

Only workshop and party slots for leaders are available.
No more slots for followers.

All parties and workshops will take place at Danz Artistica, #04-03 ICB Enterprise House. 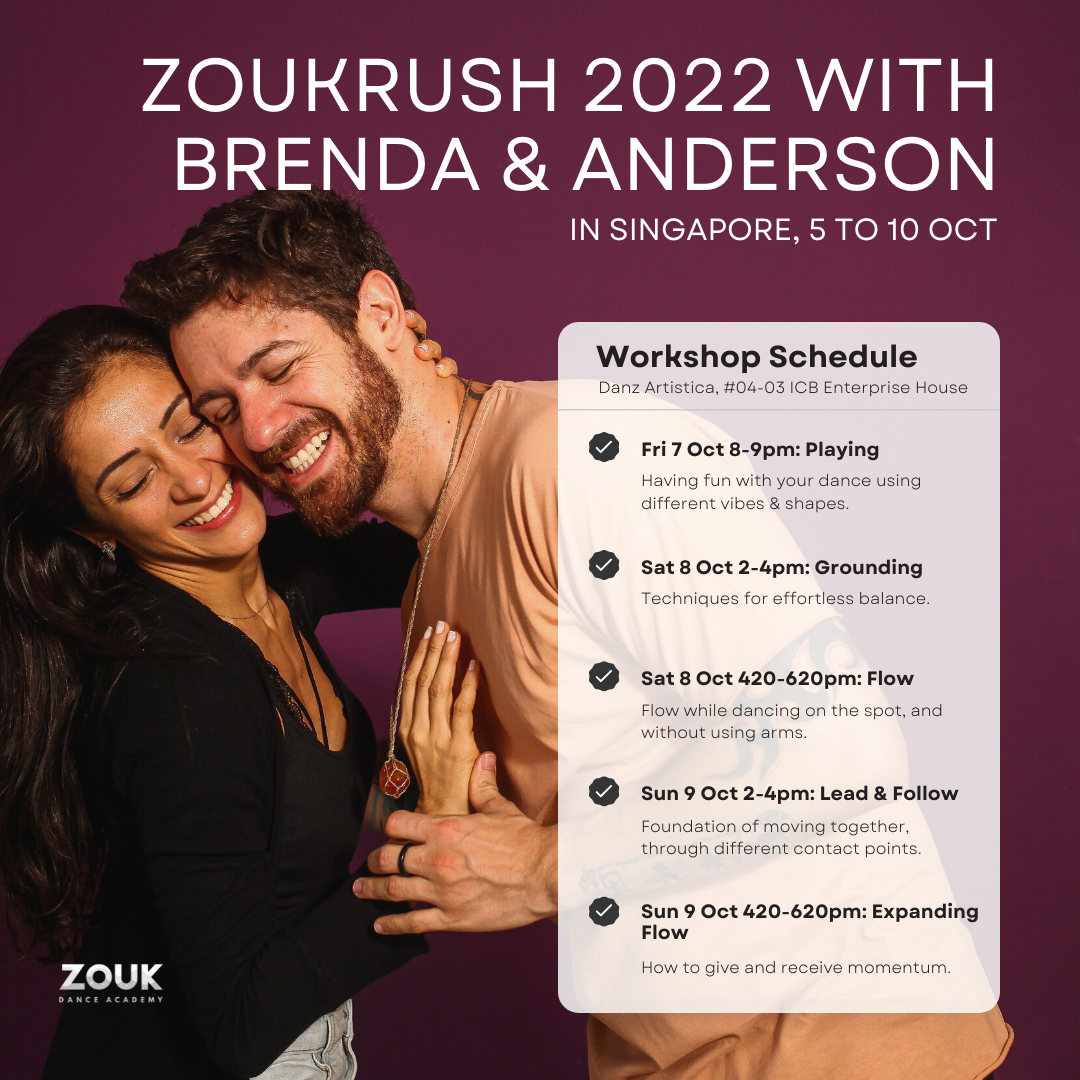 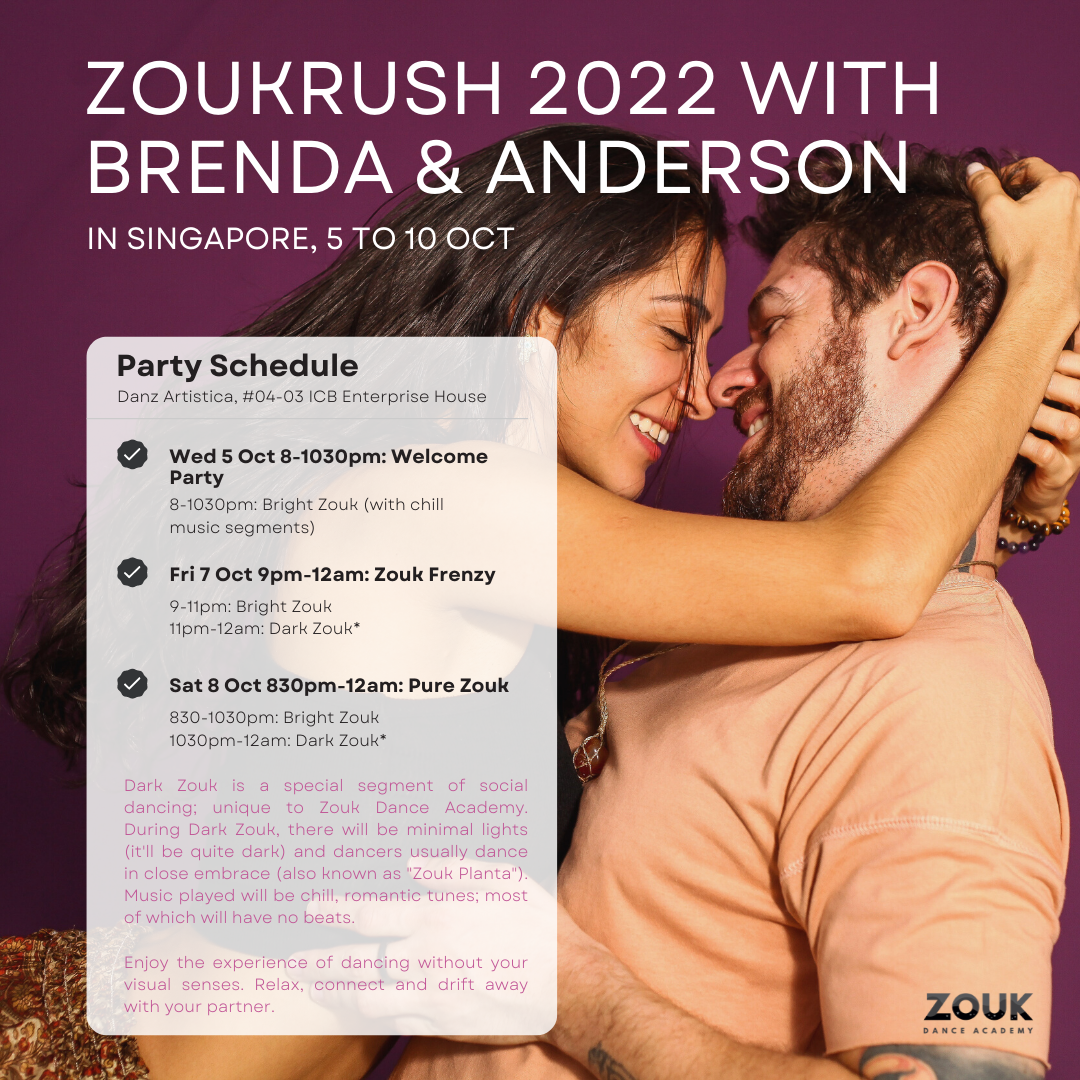 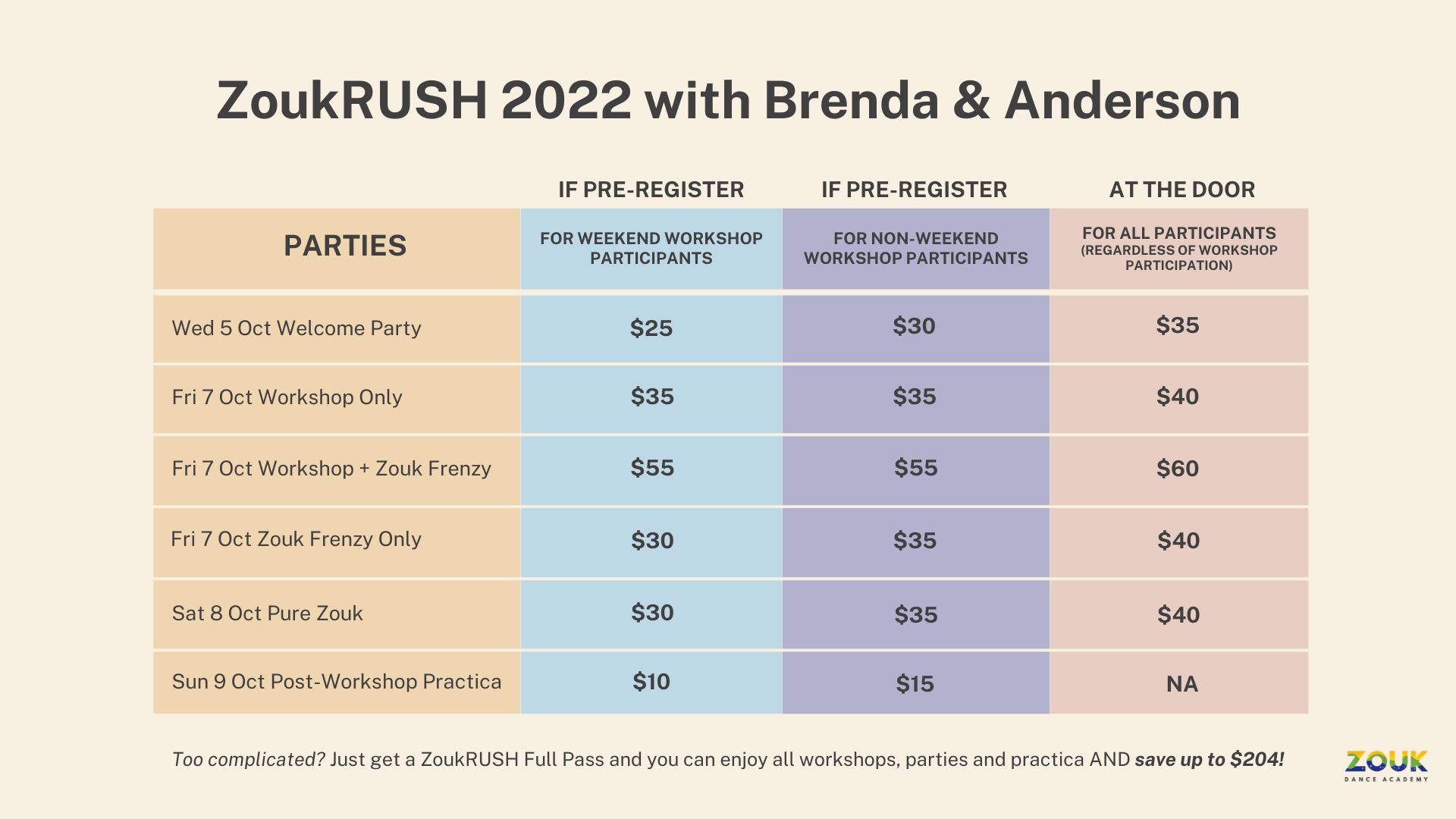 Where will the workshops and parties be held?

Workshops and parties will be held at Danz Artistica, #04-03 ICB Enterprise House.

Are there any refunds?

Can I stay with one partner during the workshop?

Yes, you may stay with your own partner. Be sure to direct others away from you during rotation of partners.

What if I can't make it for the entire workshop? Can I do partial attendance?

Partial attendance is not recommended, as you will be lost and affect your partners. It's best that you make yourself available for the entire workshop. Fees for the workshops will be charged according to the number of hours that workshop is scheduled for, regardless of how many hours you actually attend.

Can I enjoy the discounted weekend workshop fees if I pay for each workshop separately?

The discounts for the weekend workshops are to reward those who make an early commitment to attend the workshops. Therefore, if you register and pay for 2 workshops (4 hours), and end up attending an additional 2 workshops (4 hours), you will need to pay $96/workshop x 2 for the additional 2 workshops (assuming you pay on the day itself). You will not be able to enjoy the discounted rate of $75/workshop under the Zouk Addict package, even though you attended 4 workshops in total (8 hours). When you pay for workshops separately, the rate of $96/weekend workshop will apply. Discounted rates will only apply if you register and make payment for the workshops by 30 Sep 2022, 1159pm. Discounts will not be applied retroactively. After 30 Sep 2022, workshop fees will be $96/weekend workshop.

When do i have to make payment by to secure my spot?

Your spot will only be reserved upon receipt of payment. Once the workshops are full, no additional participants will be allowed, regardless of whether you've registered. Please arrange to make payment as soon as possible to avoid disappointment. Do take note of the respective deadline for the ZoukRush Full Pass and workshop packages.

Will video-recording be allowed?

What if I'm in a workshop that's above my skill level?

These workshops are open to all dancers, including those who are not yet familiar with Zouk.

How can I arrange for private lessons?

All private lesson slots have been sold out.

How can I enjoy the discounted party price?